SBADS has been picking itself up from the Sleeping Beauty like COVID slumber and the Committee has decided that our first production since late 2019 will be the delayed 2021 Pantomime: Tom Thumb. 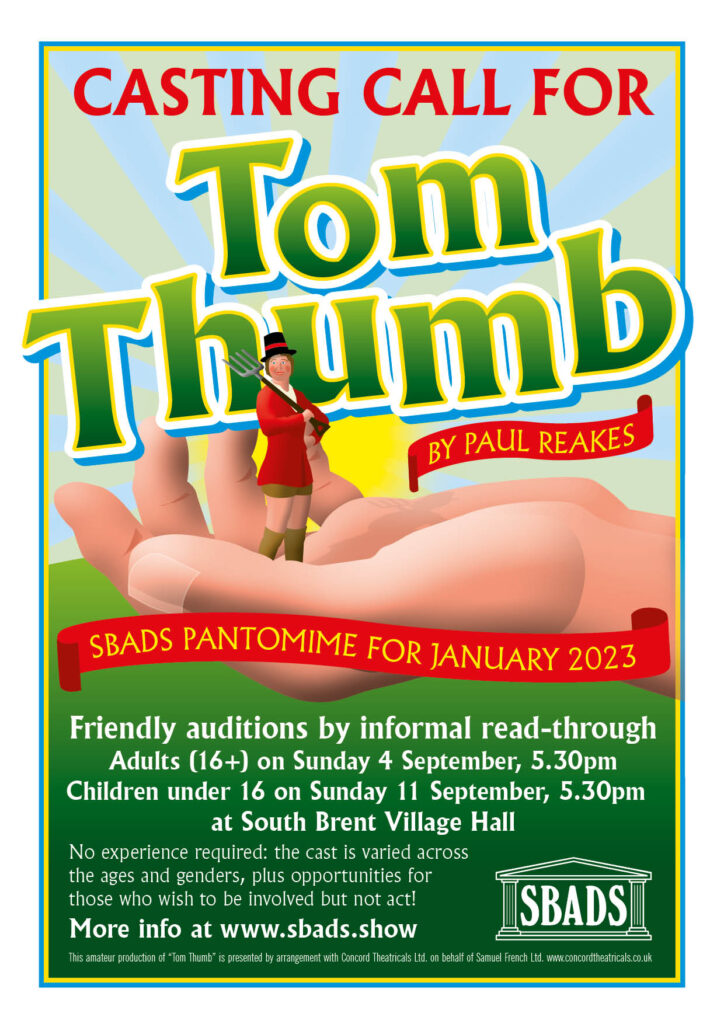 The production will be directed by Cathie Pannell and Mike Sermon.  We will be having an open read of the script for all those who might be interested in taking part in early September.

Do you want to be involved in the next SBADS Panto “Tom Thumb”? If so please come along on the following dates, to let us know and read through the script, and tell us if you would like to be considered for a part or help in some other way. These will take place in the Stansbury Room at the Village Hall.

The Cast is varied across the ages and genders.  Everyone onstage will get to dance and sing at some point; only some of the principals will sing without the comfort (!) of a chorus.

Here is the full cast, with some notes for the main characters:

Mum Thumb (Dame)  the palace cook and cleaner is a loud and ludicrous “lady”, but you can’t help liking the old girl. She is always on friendly and confidential terms with the audience, and never misses an opportunity to involve them. The part also requires some skilful use of finger puppetry

Tom Thumb (Principal Boy) is the head gardener at the palace and in love with the princess. He is a handsome young man with sparkling charisma and grace. A strong singing voice and dancing ability is required.

Tim Thumb (Comedian) is not too bright, but he is a very lovable and endearing young chap. He enjoys his own “jokes”, and is involved in plenty of comic business. Ability for comedic singing and dancing is an advantage, but good camaraderie with the audience is essential, particularly with the youngsters.

The King (Character) is a very easy-going monarch. Mature in years, he is urbane, rather vague and could have stepped straight out of a P.G. Wodehouse novel. He is more concerned about his fuchsias than the imminent arrival of the giant. No singing or dancing is required.

Princess Primrose (Principal Girl) is a beautiful young woman who is full of natural grace and charm. She also faces up to reality, unlike her befuddled father. She loves Tom deeply despite their social differences and stands up to the vile Slugslime when he makes his unwanted advances. A pleasant singing voice and dancing ability is called for.

Lucy Lastic (Comedienne) is maid to the princess and Tim’s girlfriend. She is a natural partner for Tim, being a bit dopey herself and romantically soppy when they are alone together. Like Tim she is involved in plenty of comic business and audience participation. Ability for comedic singing and dancing is an advantage, but good rapport with the audience is essential.

Slithery Slugslime (Baddie) is the giant’s evil henchman. He is a thoroughly nasty and repulsive individual who never misses an opportunity to goad the audience into a frenzy of boos and hisses. He possesses magical powers which he uses for evil purposes, like shrinking Tom to the size of a thumb. He also fancies the princess and hopes to make her his wife. A strong dominant personality is needed for this role. No singing or dancing is required.

The Crone  (Comedy Character) is exactly what you would expect a witch to look like, warts and all! But she is not a witch, just someone who is unfortunate in her appearance and choice of dress. Amazingly, when her warts have been removed (by a real witch), she thinks that she looks a million dollars and goes man hunting! Ability for comedic singing is required.

Spellena  (Magical Character) certainly doesn’t look like a witch. But she is one! A very powerful witch who only uses her magic to bring about good. She is young and very pretty, despite the fact that she is a hundred and fifty years old! No singing or dancing required, but a clear and pleasant voice is essential

Chorus of Citizens, Children, Gardeners, Demons, Woodland Wildlife and Kitchen Staff These will be filled by as few or as many who want to take part and will often include the 5 smaller parts above.  Some multi-character changes may be required depending on numbers who want to participate

Of course we will also want volunteers to help with all that goes into such a production: Costumes, tech (props, sound, lighting, music and special effects), Scenery, Publicity and Front of House, Bar and Kitchen staff on the performances.  If you are interested in any of these roles and not also acting then please don’t come to the casting calls, but contact us by email  at info.sbads+panto@gmail.com

We plan on 5 performances (4 Evening and one Matinee) between Wednesday 25th January and Saturday 28th January next year.  Rehearsals will run from mid September, usually on Sunday early evenings).

This amateur production of “Tom Thumb” is presented by arrangement with Concord Theatricals Ltd. on behalf of Samuel French Ltd. www.concordtheatricals.co.uk