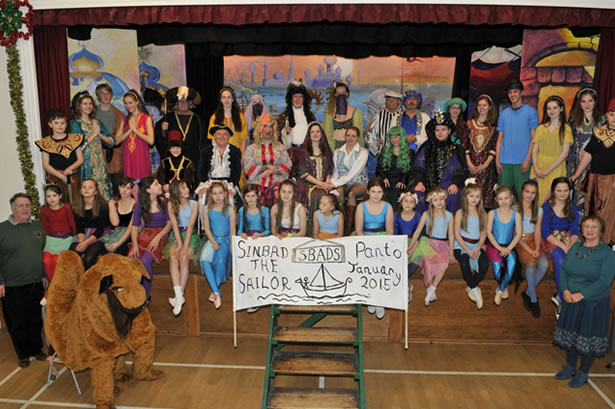 It’s Panto time in South Brent. Oh yes it is! South Brent Amateur Dramatic Society’s pantomime for 2015 is Sinbad the Sailor by Paul Reakes. SBADS performed his version of Babes in the Wood in 2013, which both cast and audience enjoyed. Members of the Parish Council fill major roles on and off stage, with Cllr Donna Warne starring as Sinbad, Cathie Pannell directing and Parish Council Chairman, Greg Wall producing. Other leading roles feature Rob Kidney as the Dame, the first time he has donned skirts, wigs and make-up in this role. Robin Lee is the vile Vazar, Peter Brown  the Ships Captain, Guy Pannell is Black Hook  the Pirate, and Victoria Lannin the beautiful Princess Yasmin.  There is also a slithery Sea Witch, a mischievous monkey, a charming camel and many others plus 30 young people in a multitude of roles. We have a group of  musicians to make it go with a swing and a wonderful back stage crew, who are painting, sewing, hammering and doing a thousand other jobs to provide us with a scintillating show. Come and join us for a fun filled evening!