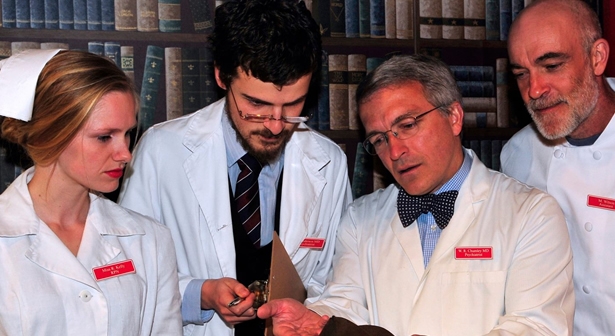 Harvey is a comedy which premièred on Broadway in 1944 and is the play on which the feature film ‘Harvey’ starring James Stewart is based.

Elwood P Dowd lives in the house he inherited from his mother in Eldorado, Illinois with his sister and her daughter. He is popular, charming and easy going, he enjoys a drink and a game of cards and his best friend is a six foot (one and a half inch) white rabbit called Harvey that only he can see.

Harvey is a Pooka, a kind of fairy creature with special powers. Elwood and Harvey get along just fine and Elwood is happy to introduce Harvey to everyone he meets, which leads most people to conclude that he is quite mad.

When the situation becomes too much for his family they attempt to get him committed to the local sanatorium, founded by the eminent psychiatrist Dr William Chumley, for treatment.

As events unfold it appears that it is those around Elwood who have a problem. Whether Elwood is happily deluded or Harvey actually exists challenges the sanity of the entire community.

Beautifully written characters bring this charming story to life which asks the simple questions: Is it better to be happily mad, or unhappily sane? and who decides which is which.

As relevant today as ever it could be said that Harvey says as much about mental health and social norms with wit and charm as One Flew Over The Cuckoo’s nest did decades later.