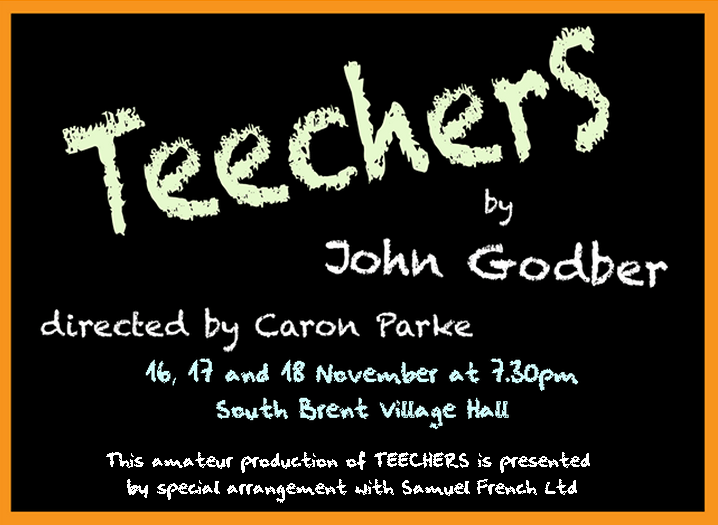 A fast-moving and highly entertaining comedy with an edge, Teechers evokes life at a modern school. Using the format of an end-of-term play, three school leavers, Salty, Hobby and Gail perform to the audience an account of their time in their school, specifically their time with Mr. Nixon, the new drama teacher who ignites their passion for the stage with his idealism and belief that all children should be treated equally. They portray his progress through two terms of recalcitrant classes, cynical colleagues and an obstructive caretaker and observe how the experiences change him.

Directed by Caron Parke, six members of SBADS share the 21 roles, staff and pupils, between them. A light touch on the stage, rapid character shifts and an authentic and sometimes earthy dialogue combine to produce a thought provoking and entertaining play on modern education.

The play deals with mature themes and occasional strong language.

This amateur production of “Teechers” is presented by special arrangement with SAMUEL FRENCH, LTD

Rehearsals are proceeding apace and the cast is getting to grips with their multiple personalities.  The newsletter which will be sent on 2 Oct has some specific requests for members to support, with props and physical presence!

As highlighted at the AGM, this will be the production where we are trialling online ticket sales in support of our traditional Box Office to see if we get more people in at the door for each performance.  You can see this (although we have not yet opened for sales) on the Seaty website here

The production is also advertised on the Thespis local amdram listing, which is available on this website here and on the amateur dramatics website AMDRAM.