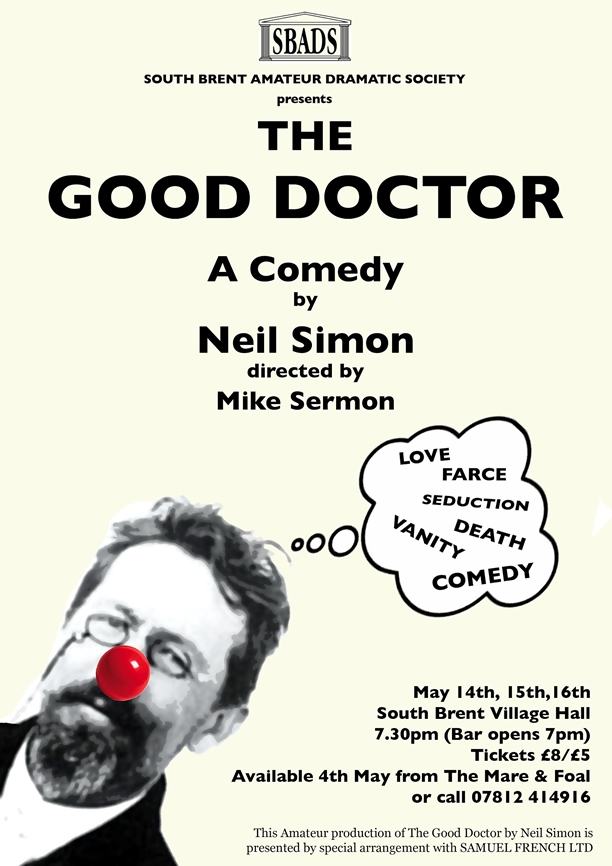 They say laughter is the best medicine, so come and get a good tonic to set you up for the summer when South Brent Amateur Dramatic Society presents Neil Simon’s “The Good Doctor” from 14th – 16th May. With humour ranging from the gently comic to Pythonseque farce, “The Good Doctor” promises to deliver the perfect remedy to blow away the last of those winter blues.

The play is a reworking by one of America’s finest comedy dramatists (“The Odd Couple”, “Plaza Suite” etc.) of a number of one-act plays and short stories by the Russian dramatist Anton Chekhov. The dialogue is unmistakably Simon’s, and while the heart of the drama is a satire on class divisions in Russia at the end of the 19th Century, many of the themes still strike a chord today. Nine stand-alone sketches collectively portray frustration, deceit, farce, excruciating comic pain, seduction, absurdity, love, hope, persistence and sex – something for everyone and all in the best possible taste. The sketches are linked by a Narrator, who represents Chekhov himself. As well as being a celebrated author, Chekhov had a parallel career as a doctor, hence the title of the play.

“As we have a series of sketches we have been able to give parts to many actors” says Director Mike Sermon. “We have a cast of 13, some of whom have never acted before and some of whom are returning after a brief ‘rest’, so we are pleased to be showcasing new and returning talent.” Among familiar faces in the cast are John Gower, Robin Lee, Rob Willoughby, Sue Burgess, Nat Cook, Ann Laity, Val Meek, Kim Kidney, Veronica Brown and Peter Brown, who is also the Producer. Andrew Doree, Sue Fitzsimmons and Gabe Sermon are all making their SBADS’ debut.

“This year SBADS celebrates its 90th anniversary. The society welcomes new members both on and behind the stage. If you are interested in getting involved we would be delighted to hear from you.